Dynamic gates use clock for their normal operation as opposed to the static gates, which don’t use clocks. 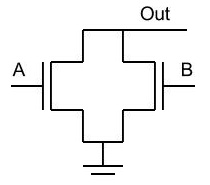 Figure : NMOS pull down logic for NOR gate.

The figure shows the pull down NMOS logic for a NOR gate. This pull down structure is used in the dynamic gates.

In static gates, inputs switch and after a finite input to output delay, output possibly switches to the expected state. 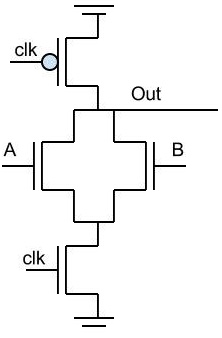 As you can see in the figure above, dynamic gate is made using NMOS pull down logic along with clock transistors on both pull up and pull  down paths. 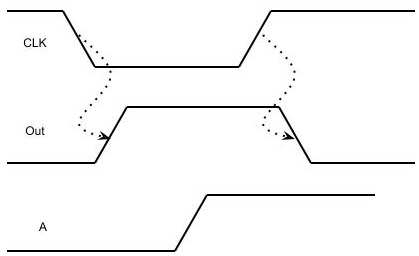 Figure : Dynamic NOR waveforms when input ‘A’ is high.

As seen in the waveforms above, as soon as CLK goes low, it pre-charges output node ‘Out’ high. While in the pre-charge state, NOR input ‘A’ goes high. When CLK goes high, and evaluation phase begins, ‘Out’ is discharged to low as input ‘A’ is high. Input ‘B’ is not shown in the waveform as it is not relevant to this case.

If both inputs ‘A’ and ‘B’ were to remain low, output node would be held high during the pre-charge.

This technique of always priming or pre-charging output to be with, is a way to minimize  switching of the output node, because if with a new set of inputs, output was supposed to be high, it wouldn’t have to switch, as it is already pre-charged. Output  only has to switch in the case where it has to be low.

But obviously such reduction in  output  switching doesn’t come free, as it means introducing the clocks and  the extra pre-charge face, where output is not ready to be sampled.

The biggest benefit of dynamic gates is that they can be  cascaded together and their pull down only property can be  leveraged to have a very fast delay through a chain of multiple stage dynamic gates.