Let’s look at the hold failure or the min delay constraint in depth here. Like setup, there is a ‘Hold’ requirement for each sequential element (flop or a latch). That requirement dictates that after the assertion of the active/capturing edge of the sequential element input data needs to be stable for a certain time/window.

In our figure below, data at input pin ‘In’ of the first flop is meeting setup and is correctly captured by first flop. Output of first flop ‘FF1_out’ happens to be inverted version of input ‘In’.

As you can see once the active edge of the clock for the first flop happens, which is rising edge here, after a certain clock to out delay output FF1_out falls. Now for sake of our understanding assume that combinational delay from FF1_out to FF2_in is very very small and signal goes blazing fast from FF1_out to FF2_in as shown in the figure below.

In real life this could happen because of several reasons, it could happen by design (imagine no device between first and second flop and just small wire, even better think of both flops abutting each-other ), it could be because of device variation and you could end up with very very fast device/devices along the signal path, there could be capacitance coupling happening with adjacent wires, favoring the transitions along the FF1_out to FF2_in, node adjacent to FF2_in might be transitioning high to low( fall ) with a sharp slew rate or slope which couples favorably with FF2_in going down and speeds up FF2_in fall delay.

In short in reality there are several reasons for device delay to speed up along the signal propagation path. Now what ends up happening because of fast data is that FF2_in transitions within the hold time requirement window of flop clocked by clk2 and essentially violates the hold requirement for clk2 flop.

As you can see in the waveform, the ‘Out’ node actually captures the low value of FF2_in, although the intention was to capture the high value. What is not shown in the figure is that, when hold time is violated, the ‘Out’ node is most likely to go meta-stable( you can refer to previous post about setup failure) and get into an pseudo stable state where it’s swinging between and high and low rails for a while before settling to binary high or low value. It could take a really long time( more than a cycle !) for the flop output node to settle. Consequences are similar in the sense that down stream logic could sample false data and one would have functional corruption.

Now if you notice there is skew between clk1 and clk2, the skew is making clk2 edge come later than the clk1 edge ( ideally we expect clk1 & clk2 to be aligned perfectly, that’s ideally !! ).

In our example this is exacerbating the hold issue, if both clocks were perfectly aligned, FF2_in fall could have happened later and would have met hold requirement for the clk2 flop and we wouldn’t have captured wrong data !! Your comments and questions are welcome. 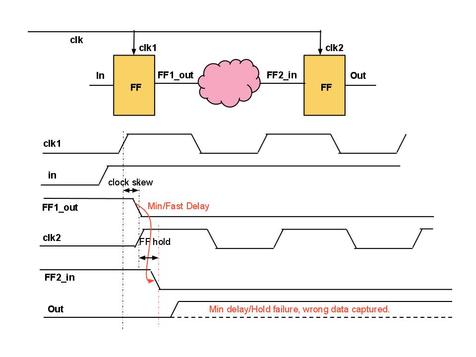