It could be difficult to grasp these equations unless you really understand what’s going on these three different regions. An alternate way to think of CMOS transistor operating regions is following.

When both ends of channel are closed, which is the case when Vgs < Vth and Vgd < Vth, transistor is non-conducting and is said to be in cut-off. When channel is formed at both ends it's in linear region and it acts as normal conductor where Voltage difference between two ends modulate the current flow. Channel depth (controlled by the amount of voltage difference above Vth) could be different at both ends but the point is channel is formed at both ends in linear region. Now when channel is shut-off at drain end, which is popularly called 'pinched-off' channel, the behavior of current flow changes. One would imagine that shut-off channel at one end means no through current, but that's not the case, even with pinched off channel there is drift current flowing because of the strong filed at drain, which keeps current conduction on. It's just that current conduction in saturation region is independent of the voltage difference between drain and source as channel is no more behaving like a resistor between drain and source any more(pinched-off conduit). Coming back to the point, it is simpler to view channel in terms of two ends. Source end and Drain end. Channel is open at either of the end of the voltage difference at that end is greater than threshold voltage. 1) Cutoff, both ends of channel off... Vgs < Vth & Vgd < Vth 2) Linear, both ends of channel on, Vgs > Vth & Vgd > Vth, Vgs could be same as Vgd or they could differ
3) Saturation, drain end channel off, Vgs > Vth but Vgd < Vth Just think in terms of Vgs & Vgs, don't stress Vds at least to understand the transistor operating regions. You can refer to the visual representation here : Wikipedia. 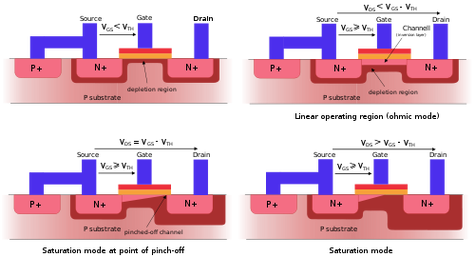